Communicating in Times of Certainty - Reminders from the NFL Draft 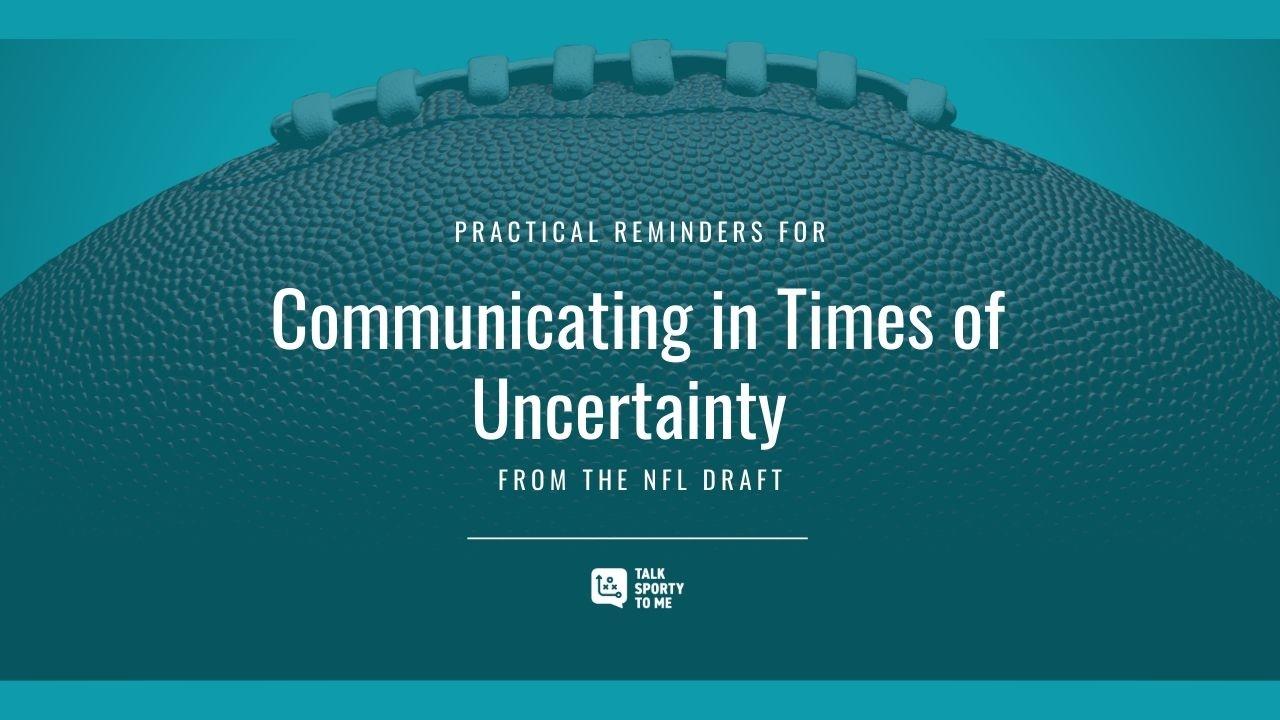 This week the NFL will releasing the entire 2020 schedule with the expectation the full season will be played and will start on time. Of course, there are contingencies in place if the COVID-19 crisis forces changes, but for right now fans can start looking ahead, getting excited for rivalry weekends and anticipating the debut of a new class of rookies.

Without even taking the field, the 2020 NFL Draft class has been part of NFL history by being the first (and perhaps only) class to be selected during an entirely virtual draft.

As the sideline reporter for the Seattle Seahawks and the founder of Talk Sporty to Me, I look for business parallels in the sporting events and press conferences I cover.

Talk Sporty to Me isn’t about clichés and metaphors, it’s about making sports fandom useful in business, relationship building and communication.

With that in mind, here are five quick takeaways from my experience as part of the Seahawks draft coverage and broadcast team that apply to conversations you’re having and the obstacles you’re dealing with right now.

5 Communication Takeaways from the Seahawks Draft

Effective communication doesn’t always mean constant interaction. Take a look at the Seahawks 1stround pick Jordyn Brooks. The team talked to him at the combine and then drafted him two months later without a follow up conversation.

Communication can be more important than talent evaluation. Covid-19 limited the ability of NFL teams to travel and see players prior to the draft. That led many people in the national media to talk about the increased importance and emphasis on talent evaluation this year. Seahawks GM John Schneider addressed that idea in a pre-draft press conference and called out communication as the most important element of the draft. He noted that it was as much about being able to communicate with each other regarding the talent evaluation as well as communicating during the draft when they wouldn’t be sitting in the traditional “war room,” as it’s called, with the entire staff.

Knowing your people improves communication. Seahawks Head Coach Pete Carroll and John Schneider have worked together for more than a decade. The more time you spend around someone the easier it is to understand what they’re saying and communicate effectively. Carroll said the same thing about his relationship with LSU head coach Ed Orgeron, who previously served on Pete’s USC staff. “Eddy and I see things squared up so when he’s telling me I’m going to love this kid… I know he’s right. That does help.” The “kid” Carroll was refereeing to was Damien Lewis the Seahawks third-round pick.

What do you do if you can’t go out and blow people away with your talent? Wow them with your conversation skills. It’s what first-round pick Brooks did in his interview at the combine. According to Carroll, Brooks showed he was a: “Really clear communicator. Strong attitude.” National draft pundits didn’t think Books was a first-round pick. His conversation skills helped secure a significantly larger contract than if he would have been taken later in the draft.

Resiliency, grit and the ability to bounce back are important in times of uncertainty. That’s true even for NFL draft picks who won’t experience a normal off season and will need to be self-starters with experience in overcoming tough situations or being an underdog. Every Seahawks draft pick has a story of grit and resiliency. The only way the Seahawks would have known those characteristics was through the players own words. Yes, the Seahawks talked to coaches, teachers and family members of each draft pick, but ultimately the players had to be able to tell their own story.

Whether you are a Seahawks fan or not, these takeaways help demonstrate the importance of good communication skills, the ability to tell your story and effectively get your point across.

Your communication skills play a huge role in your success and the success of your company, teams and organization moving forward.

Use these examples from sports to spark larger conversations and evaluate where you can make improvements. You can also download the free eBook, Communicating with Remote Teams and inquire about customized training presentations for your staff. Send an email: [email protected]