Talk Sporty 101: How to Read a Baseball Box Score 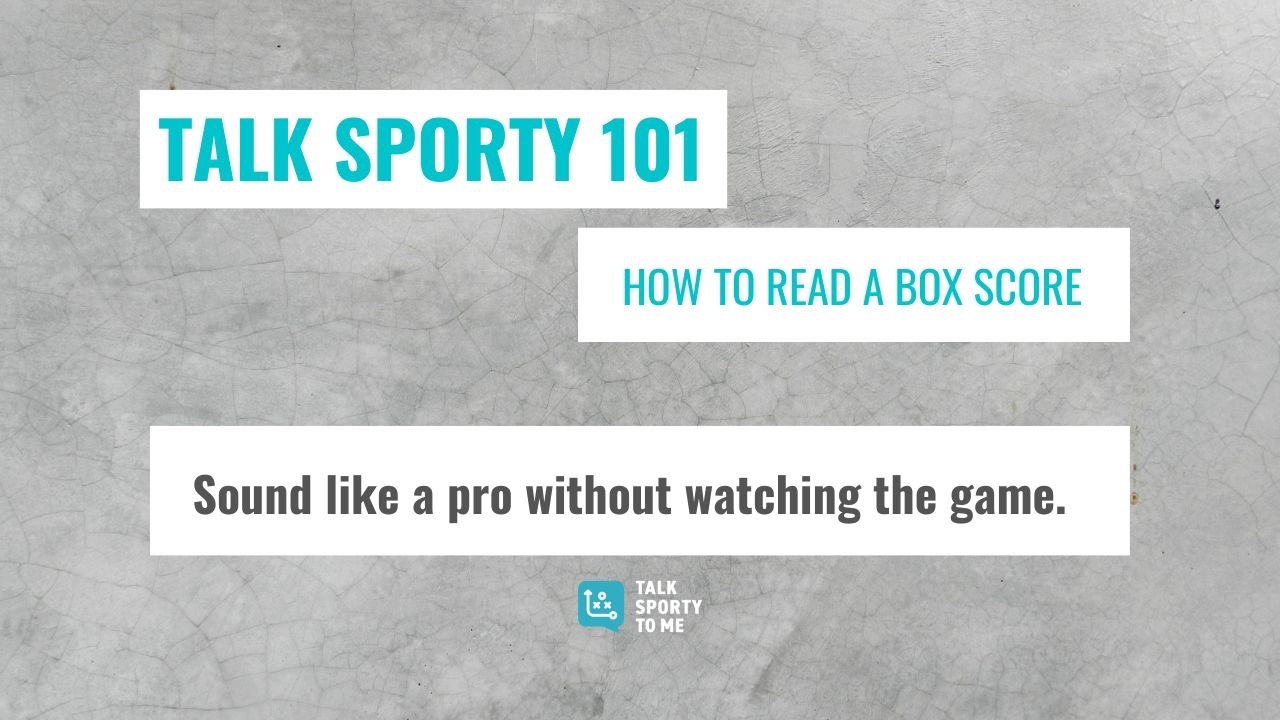 This post was originally written as a guest blog for Alumna House, a company redefining women's game day apparel. The baseball box score and game were taken from early in the 2022 MLB season, but the overall strategy is the same all season long.

You’re a fan, but you only caught part of the game or maybe you didn’t watch it at all. I get it. Life is busy and even if you love watching baseball sometimes you just can’t fit it into your hectic schedule.

Just because you didn’t watch a game doesn’t mean you can’t talk about the game like a pro. Trust me, I am one. I’ve worked in sports broadcasting for 22 years and spent the last 15 years on the Seattle Mariners television broadcast team. I watch sports for a living, but even I don’t have time to watch every game in its entirety or see every highlight. Sometimes a quick glance at a box score is all I need to figure out what happened.

A baseball box score is packed with information you can use to tell the story of the game. For today we’re going to keep it simple and use a basic box score without individual statistics because it’s the fastest way to get the information you need to have a conversation about the game. Besides that, if you didn’t have time to watch the game I doubt you want to spend several minutes pouring over a detailed statistical account of the game. Let’s take a look.

This is a basic box score from a game I covered in Seattle courtesy of CBSSports.com

At a glance we know who played, who won and the final score.

The game featured the Rays and the Mariners. The Rays won by a final score of 8-7.

The final score is indicated in the column marked R. The numbers that follow are the combined hits (H) for each team and number of errors (E) committed.

Here’s where we can dive a little deeper. The numbers 1-9 denote innings. The numbers in the columns below are the runs scored in each inning. That might be common sense if you’re familiar with box scores, but when it comes to talking about a game that you didn’t watch the runs scored per inning is a critical piece of how a game developed.

Just by looking at the numbers I can tell the Mariners scored first but the Rays answered with three runs of their own. It was a back-and-forth game. The Mariners took a late lead in the 8th inning, but Tampa scored 3 runs in the 9th to regain the lead. The Mariners comeback effort came up short. They closed the gap in the 9th but lost 8-7.

Sounds like I watched the game doesn’t it? I did, and I can tell you if you described the game like that to me I would think you watched it too, because that’s exactly what happened.

If you’re familiar with MLB teams you know the Mariners are in Seattle and the Rays are in Tampa. This particular box score calls out the fact the game is being played in Seattle at T-Mobile Park. Even without this helpful note you would still know the game is being played at the Mariners home ballpark because the home team is listed on the bottom with the visiting team listed above.

When you consider the location of the game you could talk about the home field advantage or weather conditions that could affect the game. I happen to know the stadium in Seattle has a retractable roof, but it’s not enclosed. I also know May in Seattle is still pretty cold and certainly not as warm as in Tampa. Weather is a factor in games played at T-Mobile park even if the roof is closed. If you’re not sure about the weather or the stadium itself common sense tells you there’s a lot of miles between Seattle and Tampa. That can become part of the conversation too.

If we’re adding on to our previous conversation I could say: “Tampa didn’t seem phased by the weather and the long flight didn’t seem to bother them.”

Finally, let’s consider the numbers next to the Rays and Mariners. Those are the overall records listed as wins-losses. The first thing we know is that with the win the Rays improved to 17-10 or you could say they’re 7 games over .500. The loss dropped the Mariners to 12-15. But there’s even more to these numbers. The MLB regular season is 162 games long. We can tell it’s still early in the season by looking at the records. Add the wins and losses together and you’ll see each team has played 27 games. In the course of a 162-game season that’s not very many.

So, here’s what you could add to the conversation: “It’s still early in the season. We’ll see what happens in the next couple months.”

Here’s the checklist of what we know from the box score:

Before we look at how this conversation could play out. There are two more things you need to know before you talk about a game you didn’t watch.

Conversations can be measured in seconds not minutes. You don’t need to prepare for a five-to ten-minute conversation. You can have a complete conversation in 60 seconds. Don’t overthink the amount of information you need. Your conversation skills are more important than game details. Which brings me to this – if you did not watch the game do not lie and say you did. There’s no shame in admitting you didn’t watch a game closely or didn’t have time to watch it at all. The way you position yourself in a conversation goes a long way in setting expectations.

With all these things in mind, let’s play out a conversation using the information we gleaned from the box score:

Friend: “Did you watch the Mariners game last night?”

Friend: “It was a heartbreaker at the end.”

You: “I bet! It’s tough to lose in the 9th inning, especially when they got off to a good start. The back-and-forth game must have been fun to watch.”

Friend: “Yeah, but I wish they could have pulled it out.”

You: “It’s still early in the season. Let’s see what happens in a couple months, especially when the weather warms up.”

There you have it. A complete conversation using the box score from a game you didn’t watch. A little information goes a long way when you have confidence in your conversation skills. Don’t let your viewing habits get in the way of talking sporty!