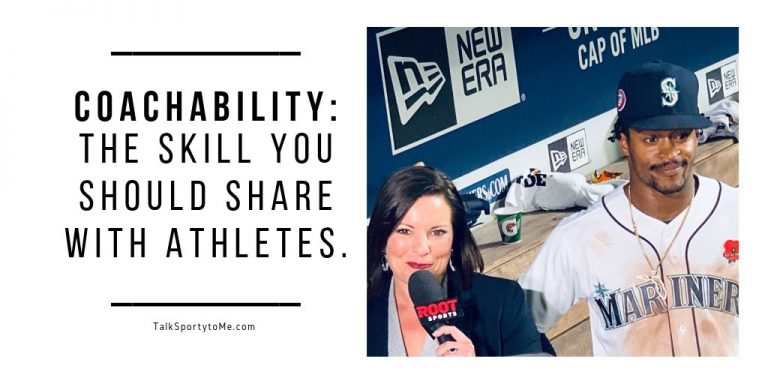 As a sports broadcaster I work with and talk to coaches every day.

They might not be called coaches, but you work with people who coach you up, give you feedback, provide instruction and hold you accountable. Instead of calling them coach, you probably call them boss, manager, supervisor, team leads, or in some cases colleagues. What you call them doesn’t matter. Your response to them does.

Coachability is a skill that gets you to the next level of your career.

You see it all the time in athletes. What got an athlete like Mariners centerfielder Mallex Smith to the big leagues won’t keep him in the big leagues. He’s had to make adjustments and be coachable.

No one likes a know-it-all or someone who doesn’t believe they have any room for improvement. There’s always something you can learn and do better. The skills that helped you land a job won’t be enough for you to keep the job. You need to add to it, develop, learn and take coaching with grace and tenacity as an elite athlete.

Learning how to delegate – truly delegate and not delegating with conditions and strings attached.

It’s not going to be easy, particularly for Type A personalities but it’s critical for leaders to manage people effectively.

Your time should be spent making the greatest impact. That’s a tough standard to reach if you’re burning bridges in process. Serial entrepreneur and philanthropist Karen Phelps Moyer joined me for a Learn from a Leader leadership development session last week and shared three mistakes she’s made as a leader as a result of not learned to delegate early in her career.

“Unintentionally hurting somebody’s feelings because I wanted it done my way and not thinking that somebody had a better way, or a way that would work just fine.” If it has to be done your way, you’re not being a leader, you’re being a dictator.

“Wanting things done sooner than later.” Forcing a timeline on staff or employees that isn’t doable simply to control the situation won’t improve productivity (or your likability.) Leaders know starting a project tomorrow doesn’t mean it lacks a sense of urgency. It does allow people to catch their breath and move at a sustainable pace.

“Getting ahead of myself.” Many leaders are visionaries because they have to be, but moving too quickly without a strategy won’t allow you to sustain a new idea or maintain what you’ve already built. You need to delegate and trust others to come alongside the execution of your ideas.

A huge thank you to Karen for joining me in May. Look for big announcements about the Learn from a Leader series in the coming weeks.

Being in control all the time is a waste of your time because you do not need to be involved in every. single. little. thing.

Practicing Leadership (with a sports twist)

Chris Woodward is the first-year manager for the Texas Rangers. Chris played and coached in the big leagues but said one of the experiences that prepared him most for his current role was taking college classes as a player because it helped develop the time management skills he needs as a manager. On the surface his college classes didn’t have anything to do with baseball but they did make him a better leader.

Your current activities are preparing you for future roles. Are you taking them seriously? Do you see the correlation? Are you being strategic in how you approach your daily routine?
Here’s one thing you can do right now to improve your leadership skills, sign up to receive my Practicing Leadership email every month. You’ll get tips like these and a new way to think about how you can develop leadership skills right where you are in your career. Just leave your name in the box marked “Let’s Do This!”