Goal Setting Like an Athlete - 4 Things You Need to Do 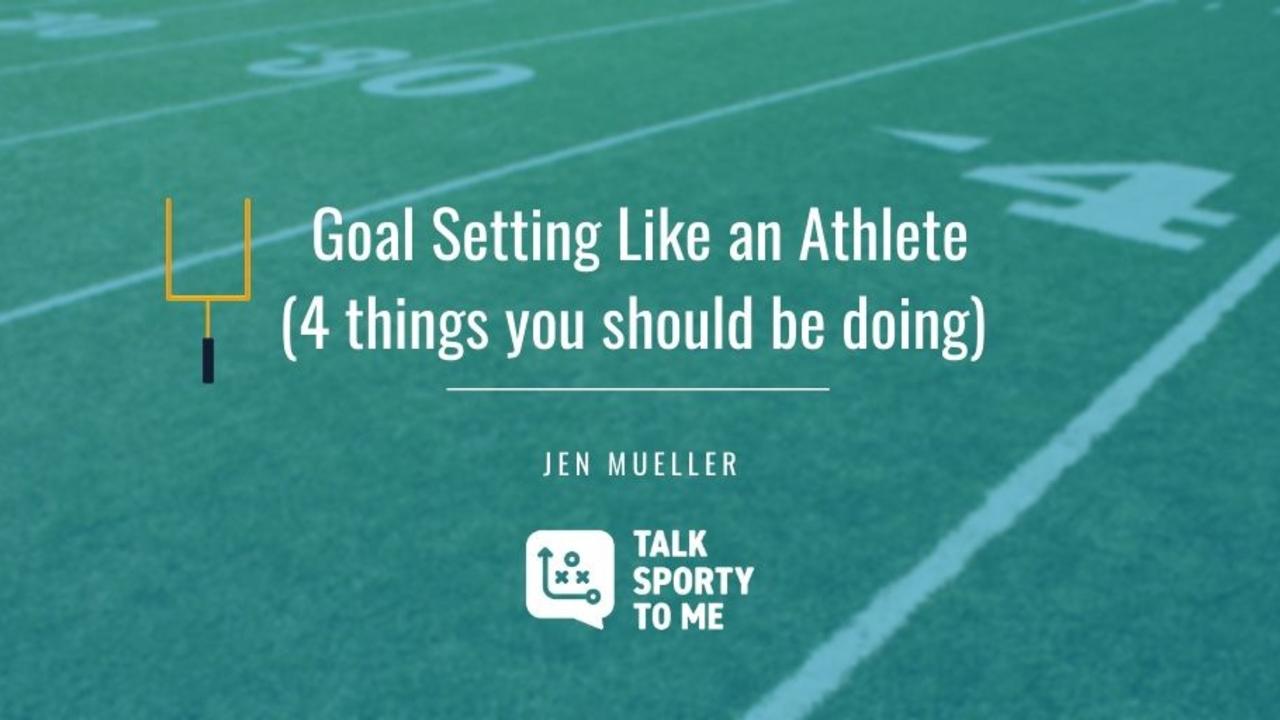 There’s no shortage of advice for making goals or how to reach them. They could be S.M.A.R.T. goals, or maybe you prefer the HARD method or the WOOP approach, but it wouldn’t hurt to include an athlete’s approach, too.

Whether you’re setting new goals for the year, refining New Year’s resolutions or establishing a quarterly revenue goal these strategies will help you stay on track in reaching your goals.

1. Determine your impact number. Yes, I know there are a lot of factors that go into success but pick one. Just ONE. Every successful team has one metric that becomes the cornerstone of their philosophy and is specific to the strengths of their personnel. That number is not points or wins. It’s more specific and it’s a stat proven to a be a catalyst for success. For example; turnover differential, on-base percentage or three-point attempts in a game. Prioritizing one stat gives teams and athletes a focal point to come back to throughout the season.

Action: Pick a number that will determine your success. It could be number of sales calls per week, or networking events per month, net worth of client or business, hours spent writing new content, etc. …

Hint: The number should be a tipping point in helping you reach your desired revenue, not an actual revenue goal.

2. Identify what you can do right now. Athletes understand there’s only so much they can do to improve in-season. The goals they set are tied to the skillset they possess in that moment. Setting a goal that requires you to change your skillset is setting yourself up to fail.

Action: Consider the number you identified in Step 1 in relation to your current capabilities and capacity. Do they align? Or are you trying to re-invent yourself as part of the process.

Hint: This should be something that is already a strength, not something that requires an additional goal to build the skill to get to your impact number.

3. Select an “offseason” project. Athletes perfect their technique or mechanics in the offseason because there’s too much going on in-season to make significant changes to how their doing their job. For example, it’s unlikely a player adds 25 pounds of muscle in-season. That’s an offseason project. So is re-tooling their swing or improving their catch radius. Athletes can make adjustments during the season, but the long-term changes come when they have more time to focus and less pressure to perform.

Action: Pick a time of year when you will focus on making a significant shift or change and commit to just one at a time.

Hint: This is directly tied to Step 2 and knowing what you can live with right now and where you need to see growth in order to make a bigger leap.

If you try to implement too much at one time you’re setting yourself up for failure and confidence crisis because not only will you fail at the new habit, but you’ll see a decline in the skill or technique that got you this far in the first place.

4. Be honest with yourself. Despite fans’ optimism very few teams have a chance to with the World Series, rookies aren’t likely going to lead the league in points-scored, a 2-14 NFL team is not going to making “Winning the Super Bowl” a goal the following season. A more realistic goal would be to finish at .500 with an 8-8 record. Be careful about coupling your big dreams with your current goals – because in the end you’ll find it’s a series of small consistently met goals that lead to your biggest wins.

Action: Revise your goals if they require you to exceed your current level of production by an unrealistic measure. For example, if your year-over-year growth is around 20% then trying to increase your revenue 500% in one year isn’t a stretch goal it’s an unattainable one.

Hint: If you can’t strategize a reasonable way to strategize getting from Point A to Point B in the timeframe you’ve established, you’ll be like the person who wants to go from couch-potato to marathon-runner in two months. It’s not gonna happen.

Unrealistic goals that cause you to spin your wheels or try to catch lightening in a bottle, waste the time and energy you could be using to reach an attainable goal.

Setting goals you have no intention of reaching or that are so far outside of what you can actually accomplish is just busywork. Stay on track and be successful by using the athlete’s approach to set goals you can accomplish.